How do we observe the Sabbath day? God made the Sabbath for man before he made race or religion, and yet there are so many conflicting idea that surround this one command: “observe the Sabbath day and keep it holy.” Although Jews read the same command and the same text from the same God we read it very differently from one another, through different lenses, in different tones and colors.  Its certainly no small subject matter and spans from the very beginning to the very end of the holy scriptures.  I am not here to  solve the debate but to add my horse to the race.

What if we looked at The Sabbath,  as a day of freedom. Not freedom from, but freedom to.

I’m an artist. When I approach my clean white canvas with an idea I am linked to it until that idea is finished and I am satisfied with how I brought it forth from my heart and mind into reality. God too, as an artist, must have been captivated by his work and to his work for six consecutive days. Was he unwilling to look away even for a moment while it remained a in process.

Sabbath is to be a sign that God, perfect, just, holy and sinless, loving and creative made the world.

Sabbath is a sign that The Almighty, El Gibor,  broke free of the process of creating when he finished. No longer was he engaged and enslaved to the flow of work, no longer tethered to the unfinished demands of his creation and the needs of the universe. The Almighty ceased because it was finally perfected, finished, without flaw , lacking in nothing. His work was satisfactory and he stepped back, cleaned his brush and put it away. He was now free from his work, free from his creation. Free to choose what he wanted to do with what he made, free to change his relationship with the artwork, no longer making it and changing it, no longer bound to altering and tweaking, adding and shaping, but free now to stand back, admire and choose how to interact with his finished product. While God himself did not change, his role changed with this newly created piece. the existence of the Sabbath itself became the sign of holiness, that it was certainly God and none other, and that he did create the heavens and the earth that he did make the Sabbath on the very day that he unchained himself from his work. it was a sign in some ways of God’s setting himself apart from his creation, freedom.

abbath, a day of release and freedom. This is my horse , my winning idea. Paul saw it as eternity, some see it as Christ himself, some as  rest, or a ceasing from activity, or a time to worship, others a time to refresh, still others to prepare. Abraham Herschel saw Sabbath as a preparation in time for the world to come, “to observe the Sabbath, he says, is to celebrate the creation of the world and to create the seventh day all over again, the majesty of holiness in time, a day of rest, a day of freedom.” pg.. 20, John Walton, says it this way, “God’s rest did not involve relaxation but rule, one the Sabbath we are to set aside our own attempts to bring order to our world by our own efforts.” pg. 171. “The Christians in the ancient church very soon distinguished the first day of the week, Sunday; however, not as a Sabbath, but as an assembly day of the church, to study the Word of God together, and to celebrate the ordinances one with another: without a shadow of doubt, this took place as early as the first part of the second century.”-Bishop GRIMELUND, “History of the Sabb 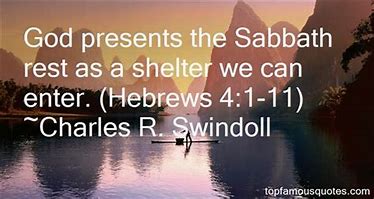 ath,” page 60. or John Calvin’s horse that the Sabbath  ‘is a remedy needed to keep order in the church.’ we all have our bets places somewhere I suppose.

We have one day in seven to remind us that we were created free, by a loving and just and sinless God, alongside a sinless world. That God not Satan created the universe that God not evil, not hate, not corruption and wicked desire, lust and disobedience. those things were brought in afterwards, after the Lord made the Sabbath and he made it holy. Sabbath is a sign that we were free before we were bound. He made freedom for us, He gave us a moment every single week to rest from the hold sin has on us.  on the Sabbath day we come away from the world and its expectations and enter into the space of freedom where we choose , as God did on the very first Sabbath.

God’s posture towards us changed when he went from creating to instructing and from making us to interacting with us. He set down the paintbrush and picked up the scepter.

The Torah portion this week,  ordinances, begins like this: “if you buy a Jewish bondsman, he shall work for six years and in the seventh he shall go free.” Exodus 21:2. When we truly observe the Sabbath we shake ourselves free from the hold sin has on us. We are free to engage with the one who ceased his creating so that he could start relating. the Jews keep hundreds of Sabbath rules, there are not in fact hundreds of rules regarding Sabbath in the scripture, on the other hand the Christians don’t even keep the ones that are in scripture. What is it that God truly wants us to keep in regards to the Sabbath, how do we observe what we cannot seem to define? how do we honor him and His Holy sign? I think it’s somehow through Freedom. Freedom from the rules, freedom to keep the rules, either way, but freedom to engage with a Creator who has freely chosen to engage with us.